When I arrived in Singapore it was quite a contrast with Indonesia and I was happy to be able to say I have now been in two Asian countries. We arrived in the evening and took a taxi to our hostel, and right away I noticed how quiet it was in the streets. Sure, it was the middle of the night, but in Jakarta that really doesn’t make a difference. There is always traffic. Not in Singapore.
Another shock I had was that everybody stopped at the traffic lights when they were red. In Indonesia, it’s really more like a suggestion. And this kind of became a general idea during our stay in Singapore. People would simply stick to the rules. And I’m not just talking about written rules, such as no chewing gum (which is literally a law), no food in the subway and no smoking in a lot of places. I’m also talking about the unwritten rules, like getting up for the elderly in the subway or in the bus, like staying quiet in the street when it is late at night… And all these unwritten rules have written forms that really impressed me. One of the things I kept noticing in Singapore is the amazing marketing skills they have. Look at some of the signs below, that really speak to you and make you want to stick to the rules. #standupstacey 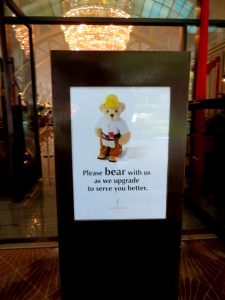 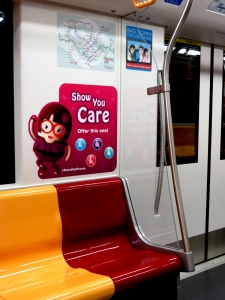 I really felt like Singapore is a city that really focuses on making it as comfortable as possible to live in. There are plenty of subway stations and busses to get around, they have many parks and benches, places to relax… They even had a charging station in one of the subway stations, which I thought was such good service!

The trip to Singapore already started great. I met my friend at the airport and together we waited for our flight to Singapore (where she had a layover a few hours before, which we didn’t know beforehand). We saw a sign there, in Indonesian, which I roughly translated to: you cannot shout the word ‘bomb’ at the airport.
When we were in the airplane, I explained to my friend that everybody in Indonesia asks you ‘where are you going?’ instead of ‘how are you?’ I told her how you just give them the simple answer, like: I’m going to the office. But you won’t tell them what you’ll be doing there, like: I’m going to the office to plant a bomb.
‘I thought you couldn’t say bomb?’ my friend asked.
‘No, you cannot shout it,’ I clarified, even though that was just my interpretation of the sign.
A few minutes later I started playing a game on my phone (not because we were already sick of each other, but because I was restless and needed something to do) and I decided on Fruitninja. For those of you who don’t know the game: what rock have you been living under?
In the game, there are pieces of fruit and there are bombs. Can you see where I’m going with this?
After a while I hit a bomb and in the heat of the moment, I yelled: Ah, no, I hit a bomb!
There were no consequences and I think nobody paid attention to the two loud bules in the airplane, but I thought it was kind of a funny moment.

What they say about Singapore is true. It is very clean. And I expected it all to be very modern and fancy, but the truth is, Singapore has many different areas. We went to Little India (where we stayed in a hostel also), to Chinatown, to Arab street, and in each of these places the atmosphere is totally different and a lot of people from these countries lived there.

The food was amazing. We went to this one restaurant that was a one minute walk from our hostel, where they made the most amazing sauce to go with the mini springrolls. So we ordered that a lot, even if it was just for a late night snack. We ate a huge plate of vegetables and some falafel in Arab street and in Chinatown we were adventurous and ordered some stuff off the menu of which we had no idea what to expect. Plus, I found a salad bar that became my favorite place in Singapore on day one, so we went back one more time later that weekend.

We also spent one morning in a great natural park, where we were planning on hiking for 5 kilometers, but we ended up walking only a fifth of that. It was so hot. But it was beautiful and we also saw a bit of the natural activities there, like an ant migration and a monkey running through the playground.

One of the main activities during this trip was making small videos, usually of us singing. When I edited this all together, I will share some of those moments with you. Some may say it’s embarrassing I just say we were having fun.
And we did.
But until I can upload the videos, you’ll have to do with the photographs below. 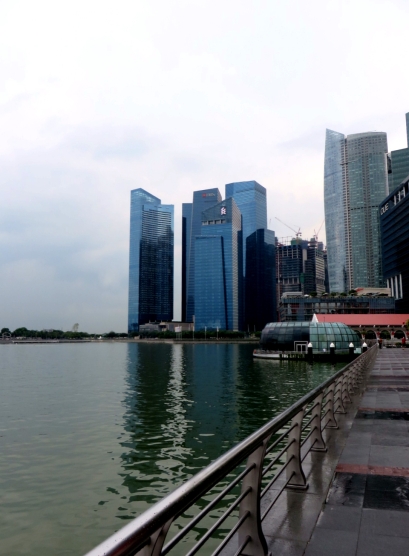 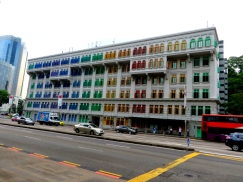 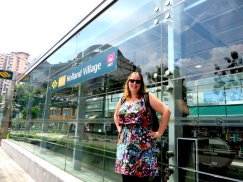 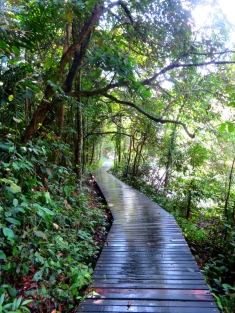 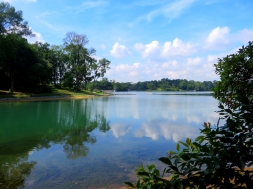