Traveling is one giant emotional rollercoaster.

I try to limit my posts to one a day, so you guys don’t get overwhelmed with jealousy ;) I know you all prefer the one-photo updates and that’s fine. We’re all busy people.

But this is one of those things that happens and needs to be put into words right away, otherwise the feeling will be forgotten. And even now I’m struggling to capture it in a blog.

This morning I arrived in Siem Reap with another nightbus. This time I was well prepared. I brought an extra t-shirt and a sweater against the cold airconditioning. I even brought socks! I had also managed to get some food beforehand, but when I got to the busstation, I realized it was the same buscompany as my ride from HCMC to Phnom Penh. I was not happy.

Turned out the bus was a lot better. This time there were actual matrasses and pillows, the only downside was that you had to sleep in the bed with one other person, but I ended up with a tiny Cambodian, so that was fine.

I had everything I needed to sleep well, and yet still, I didn’t. The only time I slept was at the end of the busride, and I had to come from a place far away when we arrived and had to get out of the bus. At this point it was 6 AM.

When I arrived at my hostel I couldn’t check in yet. Of course I was way too early. I sank down on one of the couches and just read a bit, slept a bit, and was in excellent company. 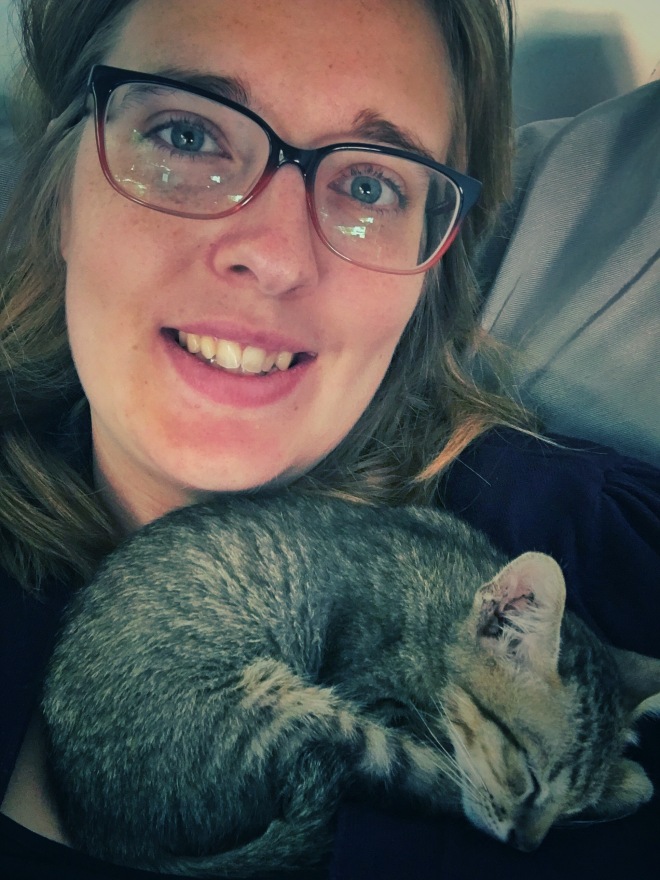 After a while I could check in, and by that time, it was already afternoon. And I don’t know why exactly, but I was feeling strange. I felt like I should be tired, because I hadn’t really slept, but I wasn’t really. However, I kept convincing myself that I had to be tired.

The day passed by and in the afternoon I could take a shower and I ate something in the hostel. But basically I just read all day, with a lot of naps in between, and a lot of kitty-cuddling.

Siem Reap is famous for the Angkor Wat temples, and I had plans to go there by myself, with a motorbike. But I learned here that that was not possible, due to some sort of law or regulation. So I had to get a tuktuk, but worse, I needed people to fill the tuktuk. Not only so I wouldn’t have a lonely day, but also because it would save me money.

So I just hung out at the bar, not looking like my shiny self, wallowing in self-pity.

And there have been a few of these moments. When traveling, you need to take care of everything yourself. And sometimes I feel lazy or a bit down, causing everything to spiral into something so much worse than what it has to be.

This was also the case today. There was no disaster. I was still traveling and being awesome. I just had to get up and fix the problem.

Instead, I met up with a guy from CS, that I had been texting with. He also just arrived and he’s Indonesian, which made him awesome right away.

And he also wanted to go to Angkor Wat tomorrow, and also didn’t have a tuktuk yet. Funny how things just seem to sort themselves out that way.

We went to a sort of restaurant and sat at a table very close to a guy eating alone. After talking to him for one minute, I discovered he wanted to go to the temples too, tomorrow, and I asked him if he wanted to share a tuktuk. And just like that, the tuktuk was basically full and the price per person went from 15USD to 5USD.

And I made two awesome new friends. 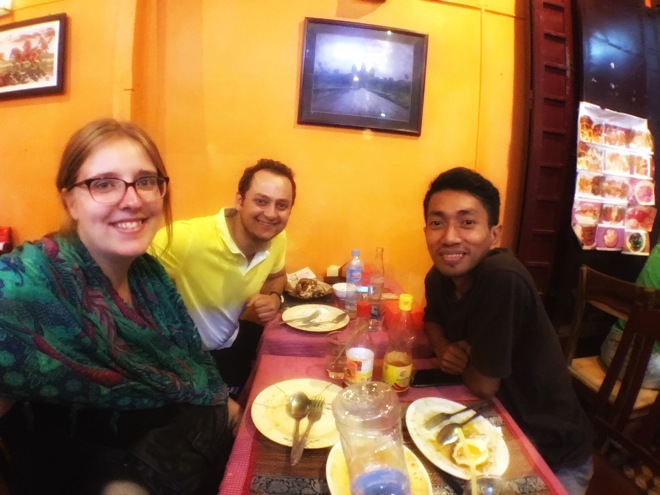 We had a great evening together, the perfect ending to a sucky day. And I’m sure we’ll have heaps of fun tomorrow.

(I know this wasn’t my best written blog so far, as I am actually typing it all on my phone. But this was more about capturing the moment than anything else, so thanks for sticking with it.)